“My aim is to restore our connection with nature, using cross disciplinary methods to achieve a minimum footprint and widen the audience acceptance.” – Adriana Cavalcanti 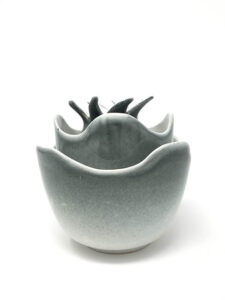 Adriana Cavalcanti was born and raised in Rio de Janeiro, Brazil. Her childhood was a constant back and forth from the city to the farm. The contact with nature was so ingrained in Cavalcanti that she barely had memories as a child in the city. The city for Cavalcanti was just a place where she would go to school, everything else was in nature. She feels that she has been lucky to have had a great education which made her come to the realization that she was different as a child from the rest of her colleagues. Because she felt different, she didn’t have many friends, especially in the city. The community that she lived in was very poor and the majority of the children were of a different race.

As a child Cavalcanti never saw and differences between herself and the other children, she appreciated and enjoyed their food and creativity. Since growing up in that community, the acceptance for social diversity and respect for nature was imprinted upon who she is. Later in life, as an adult, she got a degree in Biology and started pursuing her master’s degree in conservation biology however, she started to get really frustrated with the limited language in the scientific community. She was tired of seeing the results of our paradoxal relation of dependence and detachment to the natural world. She needed to find another way of communicating what she was seeing and feeling.

Trying to find her way, she navigated through other disciplines, photography and landscape architecture until she found clay. Clay was exactly what she was looking for. Arts and crafts was always part of her upbringing she believes it is a trait that runs in her family. She was reluctant at first to accept art as a possibility as her mother was an artist who had struggled with making a living, which was discouraging to Cavalcanti. She ended up moving to Minneapolis with her husband which set her life in motion, inviting the needed change she became a professional potter. Five years later she started the MFA program.

Art became Cavalcanti’s escape from the frustration of not being able tackle the environmental and social issues with her past scientific background. Through art she developed ways of expressing her concerns and sharing them with people. She is also exploring creative solutions for those concerns. Cavalcanti is interested in people’s reaction to the problems that she is presenting which in turn directs her to the solutions. She has several inspirations that have led her to the work that she currently creates. Some of those inspirations include: her childhood memories, perceptions as an environmental researcher, and the numerous social conflicts in neighboring cities. Most of her work is a result of these influences, and a response to society. Natural elements are her favorite medium, anything from dried leaves, to living plants and rocks has potential for art. The art pieces itself can be presented in many forms, from videos, urban interventions, site specific installations, or more traditional gallery art-work.

Cavalcanti wants to interact with her audience, she wants her work to depict what she is seeing in the world around her. The engagement of the audience is a big factor in her work, even if the engagement is subtle. She states, “My aim is to restore our connection with nature, using cross disciplinary methods to achieve a minimum footprint and widen the audience acceptance.” She has always enjoyed teaching, “It has been a wonderful way to engage with people offering knowledge and exchanging ideas.” Her end goal would to become an art professor in a well-known University as well as exhibiting her work world-wide. With this degree she wants to be able to facilitate and prepare herself as a professional artist, allowing her to be financially self-sufficient and prolific in her area of interest.

See more of her work here